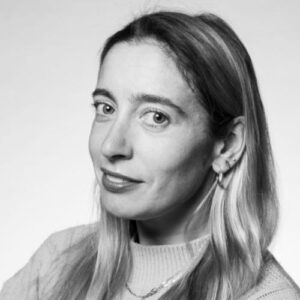 Emily Anderson is an award-winning director and creative director who has spent her career telling stories. She is also British. She spent eight years as a documentary filmmaker, collaborating with global brands that sent her all over the world — reporting from the top of an Icelandic glacier, to filming big wave surfers in Mexico, to getting incredibly lost in the remote Australian Outback, to interviewing a Russian Oligarch who’s bodyguard stood behind her with a gun. And that’s when she decided to get into comedy.

Emily has recently directed quirky spots for Noom, Holiday Inn, and Walgreens, and directed the pilot ‘Happily Ever Ally’ featuring stand-up comedian Derek Gaines, a hit on the festival circuit. Her first narrative short premiered at the Hamptons International Film Festival, where it won the Next Exposure Grant, and was recognized as one of SHOOT’s ‘New Directors to Watch’ for the surf film ‘Dare Bigger: Gary Linden’.

When Emily isn’t in production, she splits her time three ways — working as a trail guide at the oldest horse ranch in America, making short films about Montauk, where she now lives; and deck-handing on a commercial fishing boat, a hundred miles out at sea, getting paid in lobster.